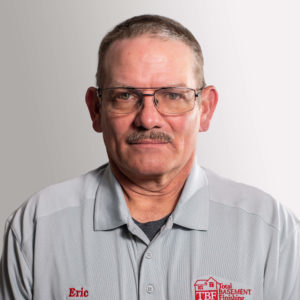 Eric has been an Energy Swing Windows team member since 2011. Prior to Energy Swing, Eric ran a home building and remodeling business in Jamestown, PA. His relocation to the Pittsburgh area brought him here as a Project Manager for windows and doors and now for Total Basement Finishing. In this role, Eric wears many hats. The first being leading his crew of installers during a project, confirming that they are performing up to the highest standard possible. Eric is the decision maker on the job site. It is his responsibility to make sure that the job is completed in the agreed upon time frame, as well as accurate and precise. Eric also acts as the liaison between the crew and the customer. He puts great pride into his efforts to ease any of the customers concerns, as well as ensuring the greatest level of customer satisfaction. We often receive tremendous reviews due to Eric’s abundance of knowledge and impeccable customer relation skills.

Along with the rest of the Energy Swing crew, Eric is a true family man. He spends his free time with his wife, Virginia, and his daughter. Eric is quite the jokester and can bring a smile to anyone’s face with his contagious laugh. He leads his crew well and is willing to go above and beyond to help out not only his customers, but his co-workers as well. He is the definition of a team player and that makes him an important asset to the Energy Swing Windows and Total Basement Finishing team.

READY TO GET STARTED?
REQUEST A FREE ESTIMATE!
Get a Price
Special Financing
Pay Nothing for 12 Months!
Learn More