I’ve probably been asked “how tall are you?” somewhere between 50,000 and 150,000 times in the last 40+ years. And yes, I did play basketball—the second-most common question I get asked—even though I didn’t particularly LIKE basketball. At least not in the beginning. 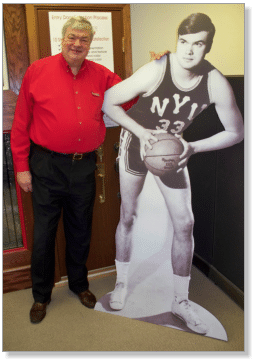 You see, my “take-it-or-leave-it” attitude toward basketball has a lot to do with how and why I created the biggest breakthrough in window technology in the last 40 years—the swinging window that swings open like a door for extreme ease-of-cleaning and enhanced energy efficiency.

I was born in 1947; like many kids of my era, my parents taught me the value of good, old-fashioned hard work and doing things the right way the first time. My father was a machinist who was always tinkering around the house with some sort of construction project or auto repair—and he always included me.

So the “tinkering” bug bit me too, and as a boy I found myself taking things apart, putting them back together, and trying to figure out better ways to make things. When I was eight, I saved up enough money to buy some kind of mechanical toy advertised in Boys Life magazine. When it arrived, I quickly realized that I had been ripped off: the toy was much smaller than I expected, and the darn thing didn’t work. I was shocked—it had never even occurred to me that somebody would deliver LESS than they promised. My eight-year-old innocence had been shattered… but even at an early age, I redoubled my efforts to over-deliver and do the right thing.

By that time I was also starting to get noticeably taller than all the other boys. A lot taller. I stood six foot tall in the sixth grade, and was already 6’ 6” as a freshman in high school. Naturally, everyone told me I should play basketball. The only problem was I didn’t particularly like basketball, and I certainly wasn’t any good at it. My preference was to build something or bury my face in a textbook.

But that all changed when I realized that I could earn a scholarship to college by playing the sport. In fact, basketball was probably the only way I’d financially be able to attend college… so I began to take it very seriously.

I became the “first to get to practice and last one to leave” kid on the team. I learned to use my size to get rebounds and became a very strong defender. I wasn’t a big, flashy scorer, but I passed far better than other big men, and became the consummate team player. My coaches loved me, and my team did well. By the time I graduated high school, I had grown to 6’ 8” and performed well enough to get a full-ride scholarship to NYU, who just happened to play all of its home games in Madison Square Garden in New York City. Somewhere along the way, I even learned to love basketball—almost as much as engineering, in which I earned my first degree.

My first job out of college was with Alcoa, back in the days when pretty much all windows were made out of aluminum. I was on a team that designed and tested the first thermally improved window. I also worked actively with the American Architectural Manufacturers Association to develop performance standards for windows and doors—precursors to the NFRC standards that are still used today. I was even awarded the AAMA’s outstanding member award in 1976 at the age of 29—the youngest recipient ever, even still to this day.

All of that to say that I was able to use my hard work and determination to channel something I didn’t particularly care for (basketball) into something I was truly passionate about—engineering and window performance. You could say that my height and perseverance liberated my inner nerd!

While in my 40’s, I became frustrated with window designs that were becoming popular (and are still popular today). In particular, the “tilt” window was being touted as the greatest thing since sliced bread because they were easier to clean the outside panes. All a person had to do was lift up then “tilt in” the window to clean it. While good in theory, in practicality, many of the tilting windows were too big and too heavy for an average-sized woman or older people to handle. Meanwhile, the weather stripping on tilt windows was heavily dependent on PERFECT installation—a window that was even a tiny bit crooked would cause major air infiltration.

So I put on my tinkering hat and got to work on a better solution. I looked at windows from the customers’ prospective and wondered “what would be the easiest way to access the outside of a window for cleaning?” The answer was clear—a window that would swing in, like a door, to allow easy access to both sides.

It was too easy of an answer, and I was sure that such a window must surely already exist. Since this was the pre-internet age, I couldn’t just hop online and research it—instead, I had to ask around, attend industry events, and search for leads in person. I soon discovered that not only did such a product not exist, but many people thought I was a nut for even talking about it. I built several prototypes, and the negative chatter got even louder—nobody really cared about swinging windows; if people wanted swinging windows, surely the big window companies would make them.

But the big window companies WOULD NOT make swinging windows—I made sure of that in 1995 when I applied for a patent for the world’s first (and only!) swinging window… the Energy Swing Window. We went into full scale production of the window in 1999, and have been a major player in the window industry ever since. The window is easier to clean, more energy efficient, and still very cost competitive. It’s even been called “the wonder of the window world” by leading industry publications.

But the window itself is only part of the Energy Swing story. The lessons of teamwork learned long ago in cold gymnasiums has stuck with me.  Every employee recognizes they have value, knows what is happening in the company, and feels they have the freedom to speak up when something is wrong or can be improved upon. We have a team that wins because we deliver VALUE.

As a result, Energy Swing Windows has won numerous awards for customer satisfaction and engineering. And while it’s nice to be recognized by authoritative third parties, the recognition that means the most is what our customers say about us. We do what we say—and then some. We deliver what we say—and a little extra. All things I learned from my dad and perfected on the basketball court.

Not bad for a six-foot-eight nerd!

No comments to show.